Diamonds are precious gems. They have been sought after ever since they were discovered 1000’s of years ago because of their natural properties and their inherent beauty. The human race has been on the planet for 6 million years and diamonds have been on earth for 1.00 billion to 3.5 billion years. Diamonds have withstood incredibly harsh conditions from the time they were formed and through volcanic eruptions to the point when they made their way geologically to a depth on the earth where they could be mined. There are several steps in between that occur from when a diamond is form to when it arrives at the counter of a retail jewelry store or on the work table of custom jewelry designer for installation into a piece of custom jewelry.

A volcanic eruption called a kimberlite eruption brings diamonds up from the mantle of the planet to the earth’s surface. This geological event happened more than 100 million years ago, far before man showed up on the planet 6 million years ago. Finding a kimberlite deposit would make one think that it is a eureka moment, but from a mining operation standpoint, the work has just begun. The steps that need to take place for a diamond deposit from a kimberlite eruption can become stunning glittering diamond on gold and diamond engagement ring are featured below.

The primary way diamonds are mined by many companies is open-pit mining. The form of diamond mining is employed when diamonds are near the top of mining site or a located in an easily accessible geological layer of sand and gravel. The start the mining process to begin the geographic location of the diamonds has be ascertained. From there dynamite blasting is employed to remove the bedrock and other forms of geological components that are covering the diamonds located at the end of a kimberlite volcanic pipe. From their heavy mining equipment machines are employed to dig out the needed dirt to develop the open pit mine.

Underground diamond mining is also another method of mining used to mine for and discovering diamond deposit. This method of mining is extraordinarily complicated and complex. For this type of mining to be created the properties of the kimberlite deposit have be looked at carefully to determine if creating the mine is possible. The properties that must be looked at and carefully considered are the location, shape, make-up and size of the deposit.

Seabed mining is an additional method used to mine for diamonds. This type of minding can be accomplished two different ways which include vertically and horizontally. A machine known as a crawler operates on the sea floor and uses flexible hoses to bring the diamonds up to the surface of the earth.

Alluvial mining is another method of diamond mining. This means diamonds that have been driven to their final resting place by water or wind. This way of diamond mining takes the diamonds directly from where they ended up many 100’s if not 1000’s of years ago.

At the point in time when the right kind of ore has been found and mined it is then crushed and milled with minding equipment. The ore that has been crushed is then sent through a process called dense medium separation. The process involves combing a semi-liquid alloy of silicon and iron with the ore. The process as a specific density which is why is it named dense medium separation. From there the combined material is send over a belt covered with grease. If there are diamonds in the combined mixture, they will stick to the grease. The diamonds will be brought together, measured one by one and sorted by quality and size. From there the diamonds are employed for industrial uses, but not before they are cut and sawed to fit specific industrial uses. Mined diamonds are separated out into multiple categories by weight, color, and clarity. Once this is done the diamonds are separated out on more time into three set groups, bort, industrial and gem quality. The last stage the diamonds are made ready for cutting. 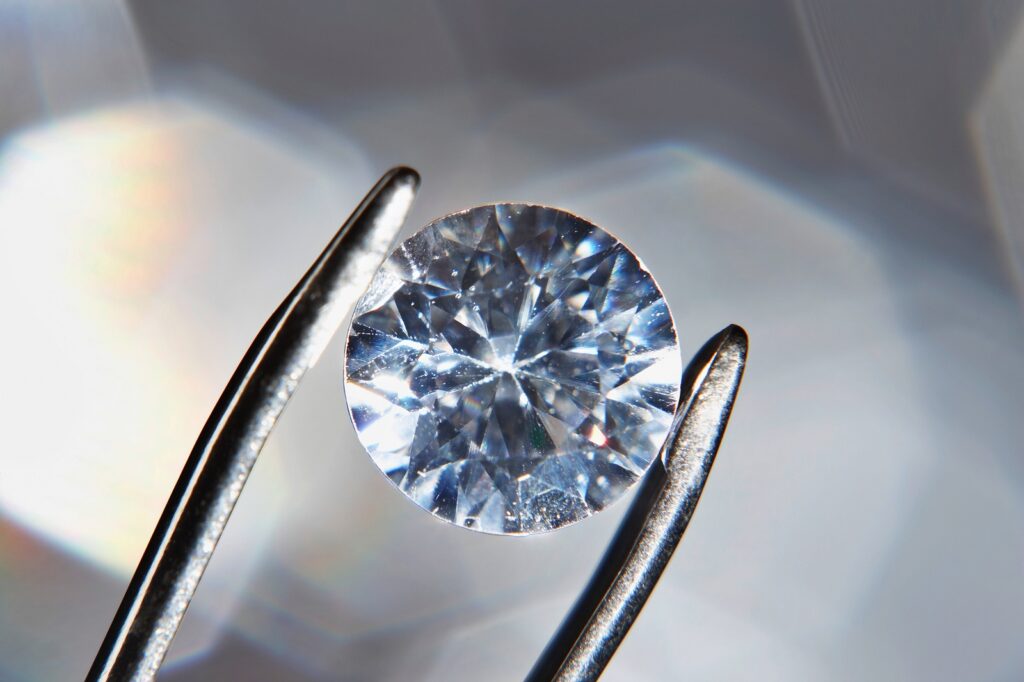