People have made and worn stunning turquoise jewelry for dozens of centuries. Because of its unique color and malleable nature turquoise has mystified us and brought us joy unlike any other stone. It has powerful cultural connections for many groups of people. Over time turquoise has been written about in history, it is part of stories passed down for generations, it is found throughout burial sites going back centuries, it is used during sacred ceremonial blessings and many cultures hold it as part of their sacred history and it is considered a sacred stone by many people throughout the planet. Historically turquoise jewelry worn has been viewed as a significant fashion and class. Turquoise is used in several types of jewelry including bolo ties, bracelets, earrings, bracelets, pendants, and hair combs. People wear turquoise as a beauty adornment, a cultural symbol, a significant promise to another person, and it is given as direct sign of love and affection.  Going back in time 1000’s of years, turquoise is a gem found in the earth through mining and traded by historically significant cultures. Turquoise is set in gold, white gold, platinum, and silver jewelry. It is part of masks and crowns set as inlay For 1000’s of years Native Americans have kept it with themselves as important talismans, healing stones, small animal carved fetish pieces and they have manufactured it into stunning turquoise adorned jewelry.

Famously, Native Americans located in the great Southwest of the United States to this day and going back thousands of years have included turquoise as part of their day to day culture and they have been making it into stunning jewelry pieces, some of which are both very famous and valuable, for decades and decades. Several New Mexico tribes have making silver and turquoise jewelry for so long it is part of both their ancient historical traditions as well as how many of the tribal members making a significant living manufacturing and selling it. Turquoise is known well by Native American tribes throughout the Southwest. It is a stunning stone, well known for it variety of color shades including dark blue, light blue, light green, dark green, but it is particularly well known for its enthralling blue color, similar to the blue color of a robin’s egg. Turquoise is know well through the world because it has been discovered in ancient times and then over time it has continued to be mined, used in jewelry, traded and worn in jewelry to this day.

The Beauty of Natural Turquoise Stone

Geologically, more than 30 million years turquoise stone was made by mother nature when water poured into a variety of rocks depositing different levels of aluminum, copper and zinc. Turquoise rarely found lower than 100 feet under top of the earth. The stunning variations of turquoise colors come from the different levels of minerals. For example, when turquoise is very blue, it contains more copper.  When turquoise is green, it contains more iron. When it is yellowish green, it contains a significant amount of zinc. The rock that holds turquoise is the matrix rock. The matrix rock is known to be made up of multiple elements including manganese oxide, cuprite, quartz, pyrite, and chert. The most heavily desired turquoise is turquoise that looks like a spider web and combines to make up smaller turquoise stones fused together through a matrix rock and all if its different components. Different turquoise mines make several different colors and different matrix rocks. In a turquoise mine, each strand or vein of turquoise will make up its own unique visual and physical natural components. For example, one of the most famous and highly sought-after turquoise in the world that features stunning spider web look people desire is the Number 8 mine, located in Nevada.

Physically turquoise colors go from blue to green and the color depth or color darkness is what normally is viewed as higher grade or more valuable turquoise. From a turquoise grade perspective, with natural turquoise, the color darkness, hardness, consistency, mine it comes from and the matrix make-up, are what makes a turquoise value and grade. Turquoise values are derived by the grading system or scale system created by each mine, such as Bisbee, Number 8 and several different well-known or high-value turquoise mines. Quite often turquoise that is deep blue in color is typically the highest value. However very well-known, famous mines know for its green turquoise carries the highest value. For the general-public, turquoise jewelry collectors and famous successful jewelers, blue turquoise is typically the most desired and famous, but green turquoise stones are also highly desired and considered to be valuable. The more unique and stunning a turquoise stone is, the more a piece of jewelry dazzles the mind and makes it more desirable.

The formation of turquoise happens at 2,500 to 7,000 feet above sea level in the Southwest region of the United States. It is found commonly in volcanic rocks in and around extinct volcanic formations. Turquoise is found in the low and high mountain desert locales in Arizona, Colorado, New Mexico and Nevada with rich high copper mineral levels. Once in a great while turquoise is also located in other states nearby, including Utah and Texas. The turquoise found in the mines throughout the Southwest part of the United States is use by both Native American jewelry artists and artists that make Southwestern jewelry and jewelry made with turquoise inlay designs. 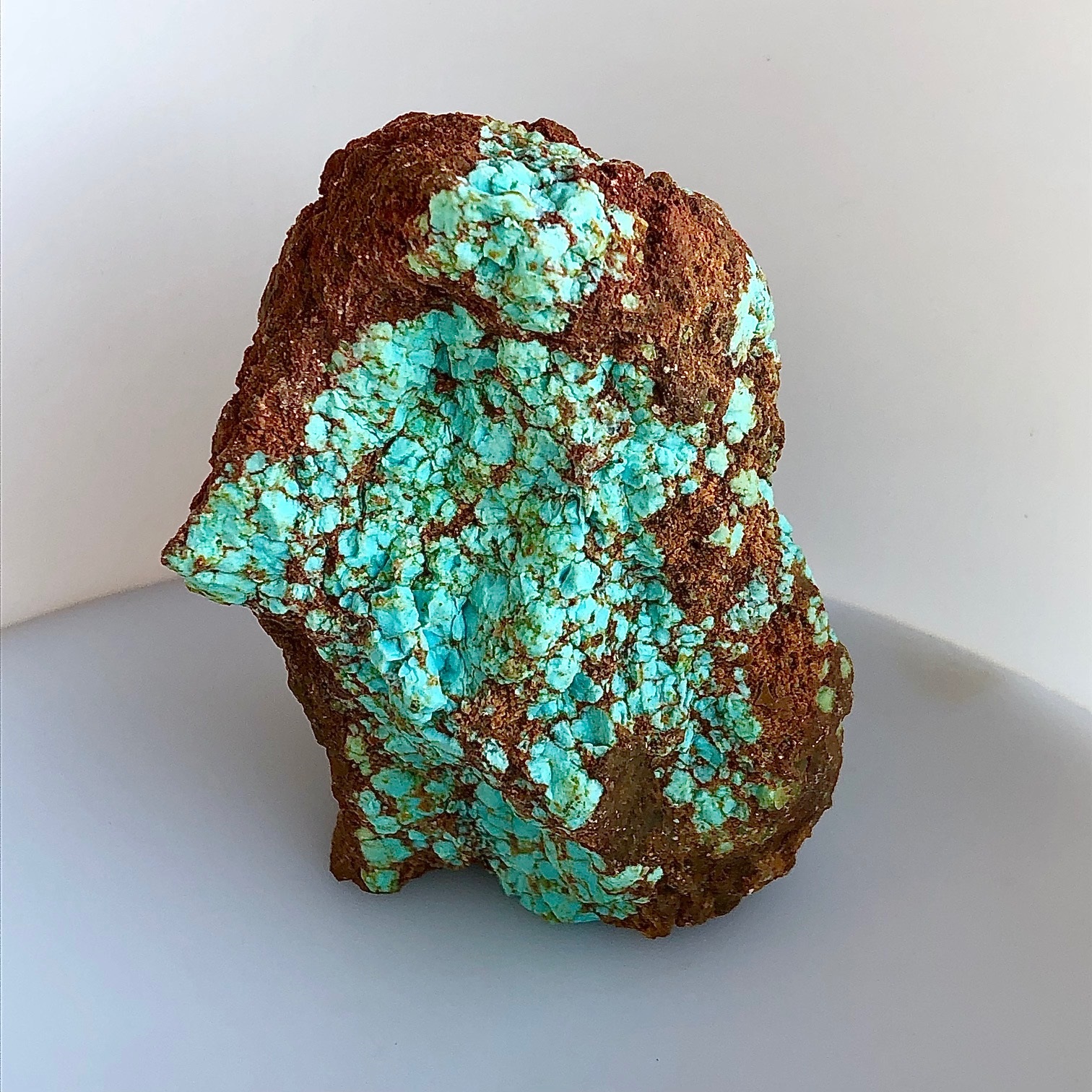