Traditional choices are part of our lives and impact our decisions more than we know.  For example, people getting married choose gold and diamonds for wedding and engagement rings a great percentage of time partly due to tradition.  However, the fact of the matter is the tradition of choosing gold and diamonds has only been the case for shorter period than you can imagine.  In the U.S. people choose diamonds and gold most to the time. In a great proportion of other countries people do not employ a diamond ring to make an engagement official pretty much ever.  Here is a review about the facts regarding traditional wedding rings. The history about the tradition will probably make your jaw drop a little.

Historically, 5,000 years ago there was a record of wedding bands being used. Couples then would wear hemp woven rings on their fingers so others would see they are married.  Rings used in ancient Roman times were made of iron. From there over time Europeans began creating artistic rings made of gold.

Here is an interesting fact to know. Americans in colonial day saw wedding bands as useless and a waste of hard-earned money. Thimbles were exchanged as sign of love because they made more sense.  As time went by, the thimble tops were both cut off, which made them into the early version of the traditional wedding band. 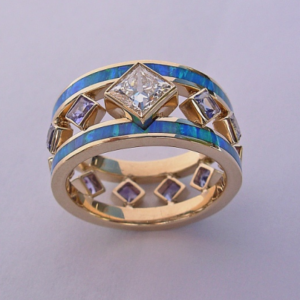 There is mention from back in those days of America’s early times where diamonds were used in the ornamental design of wedding rings.  The use of diamonds in engagement rings and wedding bands did not become common place until the 1930’s.  In the 1930’s in South Africa there was a discovery of mines with huge diamond deposits.  The burgeoning diamond industry was very aware of the fact that to lock in the value of diamonds over the long-haul, the market for diamonds needed to create sense of scarcity, rarity, and strong desirability.  Diamond juggernaut De Beers completed an extensive report that researched the diamond industry thoroughly during this period.  After it was completed it began an incredibly lucrative marketing campaign to increase diamond sales. The campaign is still going on to this day.

The campaign launch showcased the four “C’s” of diamonds which covered Color, Cut, Clarity and Carat and it covered providing the important knowledge to a groom of how much the best diamond for his future fiance should cost.  This standard education about diamond cost is the cornerstone of diamond engagement ring marketing, the two and half month’s salary rule. This was also when De Beers rolled out the well known marketing catch phrase, “a diamond is forever” that is still used to this day.

During the campaign, diamonds were given to celebrities to generate positive buzz and it marketed the message that diamonds were a symbol of one’s love, romantic commitment and true romance through newspapers and magazines. In the end the outcome was an entire new group of American women who now saw an engagement ring with a big diamond was a sign of love in its truest form.  De Beers diamond marketing campaign was a rousing success story that exists to this day. Back in the 1940’s very few newly engaged finances’ received a diamond ring when their hand was asked for in marriage. The number getting a diamond engagement ring was around 10% Now in the 2000’s number or bride’s to be getting a diamond is around 80%

The knowledge and engaging facts about wedding rings are extensive. Very few people know that several countries people were their wedding ring on the right hand because it is the hand that is employed during the taking of wedding vows.  Years ago the left hand started being used for the wedding ring instead because people are under the understanding the vein from that hand’s 4th finger is a direct line to the body’s heart, but that understanding happens to be incorrect.

American men just recently started wearing wedding rings. It started during World War Two by men to indicate a symbol their love and as a loving reminder of their wife back in the USA. 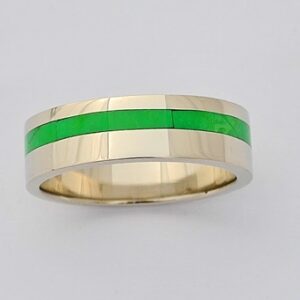