In America turquoise has been mined for as far back as several hundred years. Its largest deposits have been located mostly throughout the southwest, but for the most part in California, Arizona, Nevada, and New Mexico. It is a fact that turquoise mines in these states have been the source of the premium and most wanted turquoise gemstones on the planet for several decades.  To no one’s surprise during more recent mining of these turquoise mines there have been discoveries of ancient mining tools that the Native American’s used 100’s of years ago to take turquoise out of the ground.

Nevada has more turquoise mines than any other state in America. The big reason for this is that not all the mines in Nevada are secondary turquoise mining sites next to copper mining operations.

In Mineral County Nevada in the ghost town of Candelaria, there is turquoise mine called the Candelaria mine located in the open-pit copper, silver, and gold mine. For years it produced premium quality turquoise stones, but like most mines the deposits are mostly depleted because they are hard to reach and they have been thinned out.

The plethora of turquoise mines in Nevada are nothing to laugh at. The turquoise stones from the mines throughout the state are treasured by both collectors and jewelers because they are stunning and rare. Mine names in Nevada include Blue Diamond, Blue Ice, Blue Jay, and Blue Gem.

The Bisbee Lavender Pit in the Arizona was on the first deposits of turquoise in the American market for turquoise gemstones. The Bisbee Lavender Pit is part of the Copper Queen copper mine. The turquoise stones from this deposit are bright blue with incredible webbing features that are both brown and dark chocolate in color. The Kingman mine produces turquoise with webbing features that are black in color. The turquoise from this mine is so visually breathtaking that its look at as the jewelry standard for high-quality turquoise. 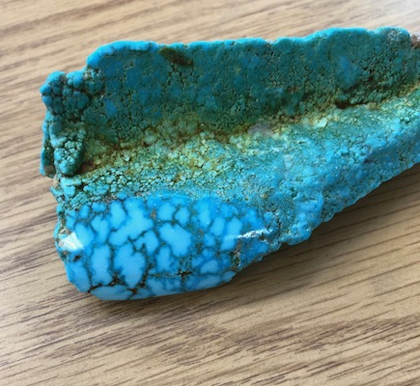